Gardner Hall opened in 1896 and had served as a movie theatre from about 1911 to 1927 at 3165 Sixth Avenue, near Swift Street (between Douw Street and Glen Avenue) in Batestown, an area once part of the Town of Lansingburgh. The building, like the Powers Opera House, had originally been a church, which it still resembles from a side view with its row of tall, narrow windows despite their alteration.

After the advent of sound films, Gardner Hall seems to have been used predominately for dances, receptions, club meetings, and boxing matches up to 1940. It briefly shared the block with the Glen Theatre, which closed in 1922. 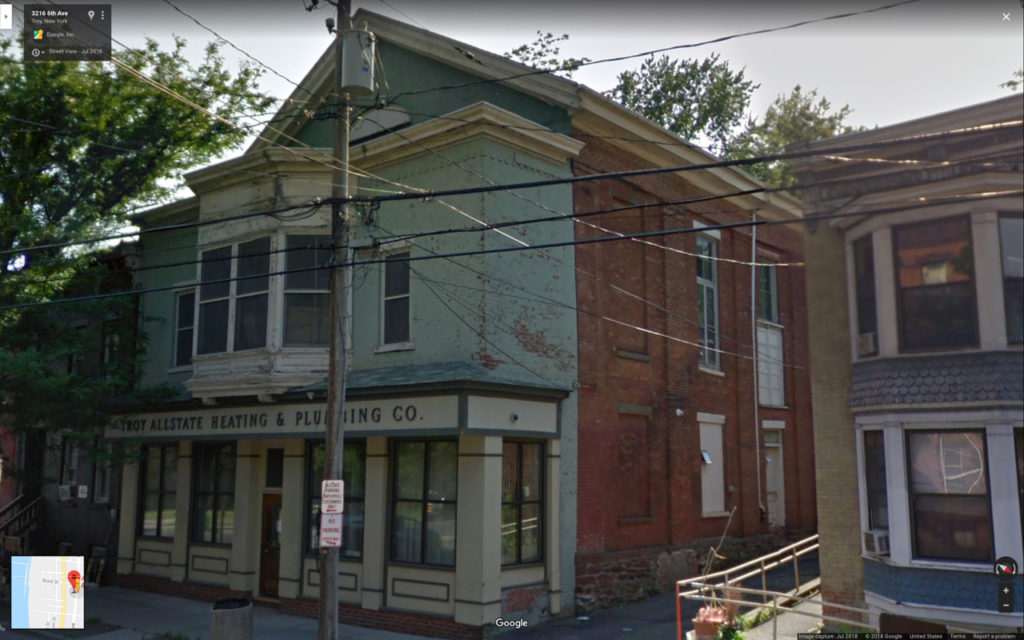 —A delightful masquerade party was given in Gardner’s hall last evening by Professor Gardner’s dancing classes. Many friends of the members were guests. The costumes were bright and unique, many of them affording much amusement.
“In North Troy.” Troy Daily Times. February 5, 1896: 3 col 5.

—William Armstrong has purchased from the Gardner estate Gardner Hall and the building immediately south, on Sixth Avenue. Gardner Hall, which is about forty years old, was until January, 1895, the Grace Methodist Church. In 1896 the new Grace Methodist Church was occupied and the building passed into the hands of the Gardner estate, which has since rented it as a public hall. Mr. Armstrong intends to do the same.
“The Northern Wards.” Troy Times. May 24, 1911: 4 col 3.

—Gardner Hall, to be opened September 30 for moving-pictures, exemplifies another instance of the transformation by stages from a church to a theatre. Built by the congregation of Grace Methodist Church as a house of worship and used as such for years, it became a public meeting hall and now becomes an amusement resort.
Troy Times. September 21, 1911: 6 col 5.

To Take Shed’s Place.
The removal of the wagon shed at the corner of Twelfth Street and Fifth Avenue, the property of William F. Wilson, who keeps the hotel next door, started to-day. The shed will be moved to the rear of the hotel, and the new motion-picture theatre which is to be built by Frank N. Barhydt of this section will occupy the site. Mr. Barhydt now conducts a theatre at Gardner Hall in the section, and has for a long time been negotiating for a theatre location in the upper section of Lansingburgh. Work will be hurried so that the new theatre may be opened during the present season.
“Lansingburgh.” Troy Times. September 4, 1912: 5 col 2.
OPEN FUND CAMPAIGN
—
SALVATION ARMY HOLDS OUT ITS HAND
—
Workers Expect Troy’s Quota Will Be Met By Voluntary Contributions—Interesting Features Promised for This Week’s Drive—To Start Donut Kettle—Soldiers Volunteer to Help—Organizations Give Support.
[…]

Gala Night at Theatres.
In the evening the activities will shift to the theatres. Four-minute speakers will appear at nearly all the playhouses in the city, and at Proctor’s Fourth Street Theatre, Mr. O’Neill and Mr. Snedecker will be on hand again, Salvation Army lassies and uniformed members of the Soldiers, Sailors and Marines’ War Camp Community Club will pass through the audience selling copies of the song that so impressively pays tribute to the Salvation Army’s war work, “Salvation Lassie of Mine,” and Mrs. Andrew H. Meneely, Chairman of the Features Committee, and her corps of workers will offer to the sweet-toothed the recipe for the delicious donut. It was stated at headquarters this morning that many box parties have been arranged for Wednesday night, which bids fair to prove the gala period of the whole drive. Another feature of the campaign at Proctor’s will be an address by Lieut. Edward L. Ryan, whose oratorical ability so ably helped the local Victory Liberty Loan campaign. Speakers at other theatres for the evening will be: Rand’s, Dr. Craford R. Green; Griswold, H. S. Kennedy; Keith’s, W. H. Breese, jr.; Lansing, Stephen V. Lewis; Strand, J. Watson Hayden; Monroe, Frank M. Chandler; Majestic, William Walker; Trojan, Charles Ray; Gardner Hall, Major A. J. Hull; King, Capt. J. B. Mugford; Bijou, Ernest Sigsworth.
Troy Times. May 19, 1919: 5 col 3. 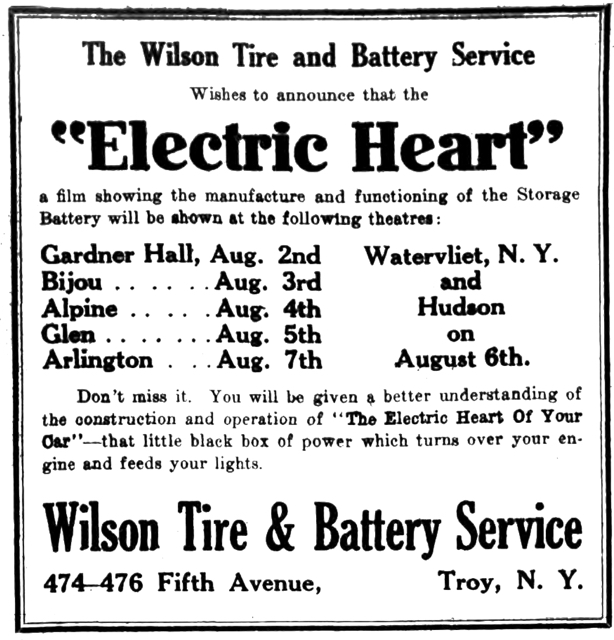 New Corporations.
Certificates of incorporation of the Gardner Hall Amusement Company and of The Sumberg Realty Company were filed this morning with the County Clerk. The first is authorized to conduct a business of dealing in motion picture films. The incorporators are C. W. Armstrong, J. S. Miller and John H. Broderick. The new corporation has a capital stock of $2,000.
Troy Times. March 20, 1921: 5 col 5.
MOVIE FUND FOR EUROPE.
—
Troy Committee of European Relief Council Reports Four Hundred Dollars Raised by Special Performances in Sixteen Theatres.
The Troy Committee of the European Relief Council announced to-day that the amount received from the special matinee given for the benefit of the fund by the moving-picture theatres on February 5 amounted to $286.25. The theatres participating were the American, King, Lansing, Monroe, Madison, Majestic, Alpine, Capitol, Bijou, Empire, Rand’s, Keith’s, Strand, Colonial and Proctor’s Griswold.
The entire receipts were given to the Hoover Relief, with nothing being taken out for expenses.
In addition the committee has also received from Gardner’s Hall Theatre $14, being the proceeds of a performance which they also donated to this fund.
Troy Times. February 4, 1921: 5 col 5.

“DANGEROUS LIES” is the feature picture at Gardner Hall and if Miss M. Armitage, 385 Fifth Ave., North, will bring this advertisement to the box office she will be given two free tickets.
Troy Times. November 29, 1922: 12 col 7.

DAVID POWELL in “Appearance” [sic] is the feature at Gardner Hall and if Alice Hoarey, 3024 Seventh Ave., City, will bring this advertisement to the box office she will be given two free tickets.
Troy Times. December 7, 1922: 14 col 3.

“WAY DOWN EAST” is the feature at Gardner Hall and if Mrs. Sarah Hancox, 841 River St., City, will bring this advertisement to the box office she will be given two free tickets.
Troy Times. December 14, 1922: 18 col 8.

“THREE LIVE GHOSTS” is the feature at Gardner Hall and if Richard Lamar, 827 River St., City, will bring this advertisement to the box office he will be given two free tickets.
Troy Times. December 15, 1922: 22 col 3.

“THE GOLEM” is the feature picture at Gardner Hall and if Mrs. Francis Finn, 3110 Seventh Ave., City, will bring this advertisement to the box office she will be given two free tickets.
Troy Times. January 8, 1923: 6 col 3.

“BESIDE THE BONNIE BRIER BUSH” is the feature picture at Gardner Hall and if Thomas Copeland, 60 Sixth Ave.., North, will bring this advertisement to the box office he will be given two free tickets.
Troy Times. January 17, 1923: 12 col 5.

GARDNER HALL REOPENS TODAY
Gardner Hall, on Sixth Avenue, between Douw Street and Glen Avenue, reopens today under the management of the Rosewind Theatre Enterprises. Gardner Hall has been remodeled and newly decorated, and it is the assurance of the new management that “Nothing but the best and finest in motion pictures will be shown.” The special screen attraction for this evening will be Zane Grey’s “Border Legion.” Sunday “Captain Blood,” starring J. Warren Kerrigan and Jean Paige, will be shown. The program for next week contains some very interesting photoplays.
Troy Times. March 28, 1925: 7 col 3. 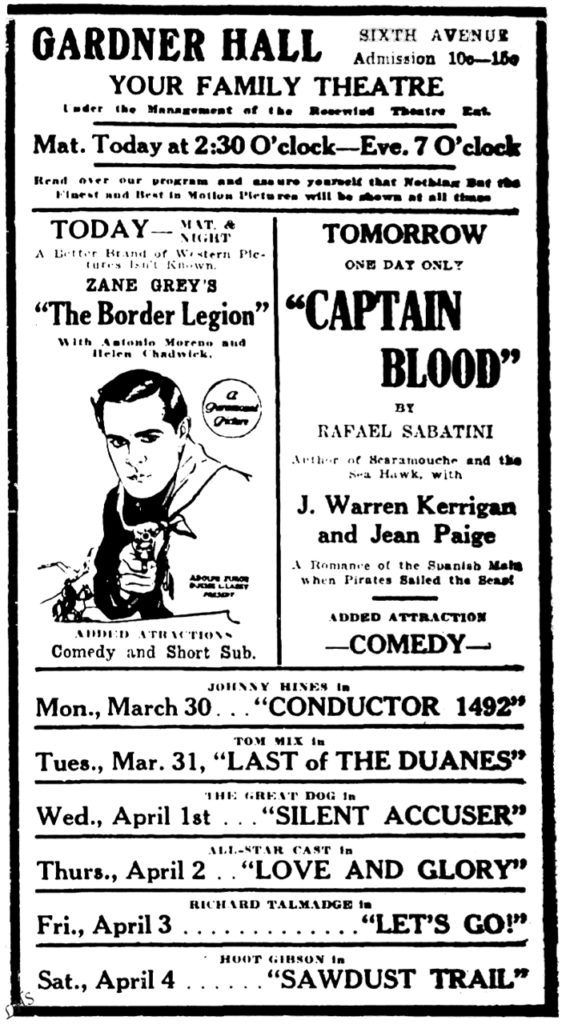 
Gilbert Geer, Jr., Co., Inc.
200 BROADWAY
Troy Times. March 10, 1930: 6 col 8.
Benefit Dance.
A benefit dance for the Brown Jr. Athletic Club will be held Wednesday, September 24 at the recently completed Gardner Hall dancing pavilion, Gardner Hall, which until the advent of the talking pictures had been a popular theatre, has been remodeled and redecorated, and will be used for dances and other affairs during the fall and winter seasons. The Brownie Club dance will mark the formal opening of the establishment.
“Northern Wards.” Troy Times. September 6, 1930: 14 col 3. 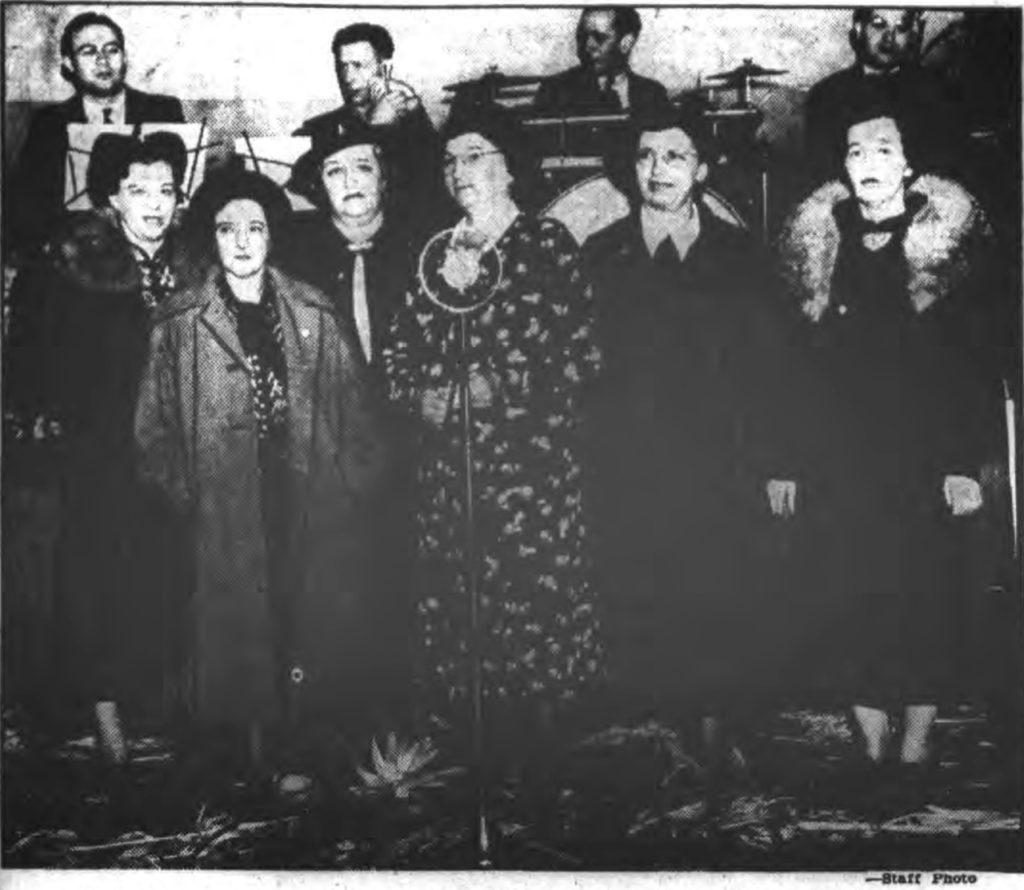 Gardner Hall, Landmark To Be Remodeled
One of Troy’s landmarks, located at 3165 6th Ave., is being remodeled for use as a plumbing supply display room.
The two-store frame and brick structure was built in 1858 by the congregation which was then known as the North Troy Methodist Church. Because 6th avenue was then known as Vail avenue, the church became known as the Vail Avenue Church.
In 1888, the congregation moved to its present building at 3106 6th Ave., and became known as the Grace Methodist Church.
After the church was moved from 3165 6th Ave., the building became known as Gardner Hall. It was used to show motion pictures and was also a popular meeting hall.
A permit to remodel the building has been issued to the All-State Plumbing & Heating Co., now located at 685 River St.
A new store front will be installed. Plans on file at the Department of Buildings also call for erection of a 20×30 foot concreete block at the rear of the building.
Times Record. March 20, 1956: 14 col 6.

Among Ourselves… By Tom Thomas
George Nugent: Loneliest Man In Troy
(First of Two Parts)
The next time you go to Proctor’s Theater, let your eyes follow the beam of light high above you. Your gaze will eventually be on the projection booth perched so far up it seems alone in a world of its own.
This cloister-like cubicle has been the workshop of George L. Nugent, Sr. 41 years. Nugent, so remotely located, has to be the loneliest man in Troy.
The genial Trojan, who lives at 12 Plum Ave., only three blocks from where he was born on Billings Avenue, began his career as a machine operator in 1919 at the strand. He spent two years at Gardner Hall, two more at the Lansing and then, Sept. 14, 1925, moved to Proctor’s. […]
How many theaters do you think Troy has had in this century? If your guess is two dozen you are close. […]
Gardner Hall will be remembered, he said, for the vivid blue flame in the bay window. It was upstairs, in 6th Ave near Douw, and the flame was from the rectifier’s mercury vapor tube, Nugent explained.
Times Record. May 26, 1966: 24 cols 1-3.