The first Japanese-American residents of Lansingburgh seem to have been Shivuo Hirahara, an RPI student, musician, and engineer, who lived with the Rev. George A. Holbrook family. He was followed by the Yosaku A. Kadura family, he a merchant and his three children had a successful song and dance act as the “Three Meyakos.” Note the large ads for the 1913 “Annual Troy Fair” at Rensselaer Park in Lansingburgh which featured, among others, Yosaka Kadura’s two daughters as the “Meyako Sisters – Petite Japanese Gymnasts,” possibly their first performance in Rensselaer County. 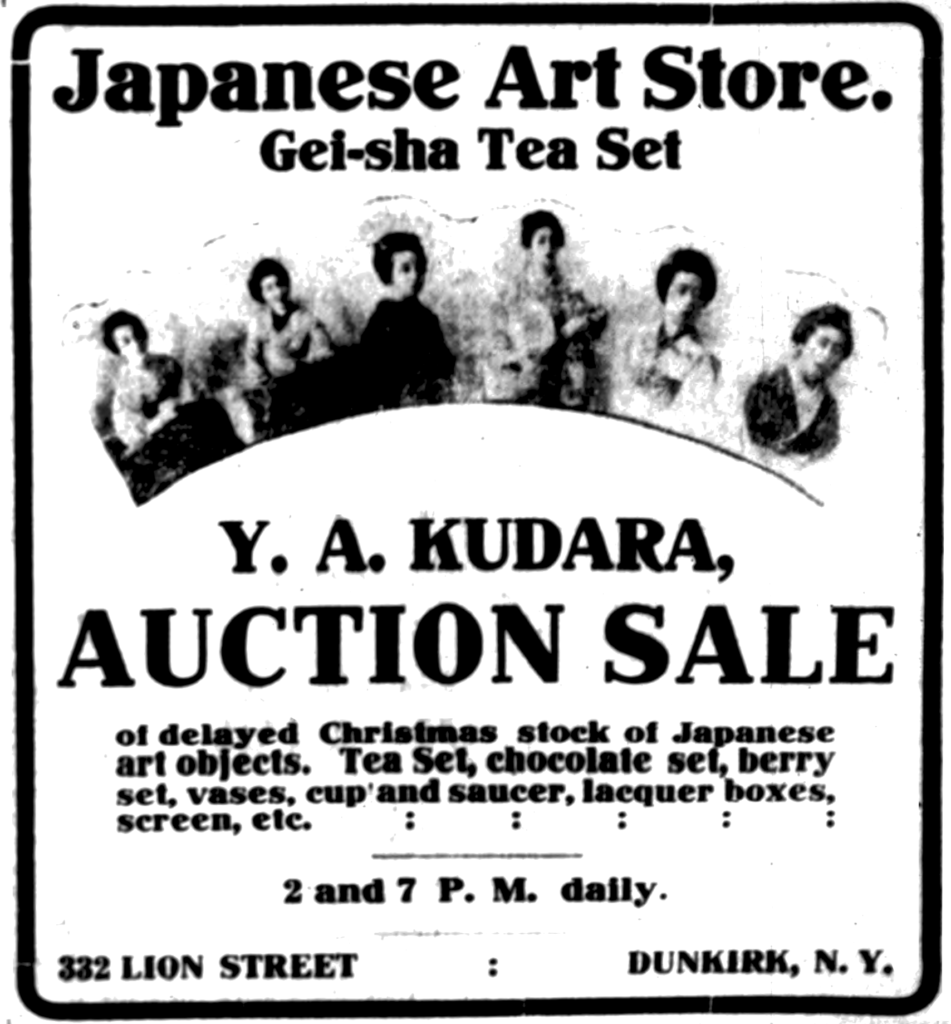 The Lawrence Orchestra
This orchestra was organized about a year ago by the advanced violin pupils of William T. Lawrence of this city, with Mr. Lawrence as Director, and is without doubt one of the largest organizations of its kind in this vicinity. The members of the orchestra as they appear in the above group are as follows:[…] [standing seventh from left] Shizno Hirahara […] The object of the organization is the study of standard overtures and the best compositions of modern composers and rehearsals are held weekly under the leadership of Mr. Lawrence, whose experience and ability as a director are well known, he having been leader of the Rand’s Opera House Orchestra for more than ten years, and also first violinist of local musical organizations. The orchestra, which promises to become a popular musical association, will give its initial concert next Wednesday evening. The officers of the orchestra are: President, Fred Kehn; Treasurer, Shizno Hirahara; Secretary, George A. Hollinger; Musical Director, William T. Lawrence.
Troy Times Art Section February 1, 1908. (Cropped from scan by fultonhistory.com) 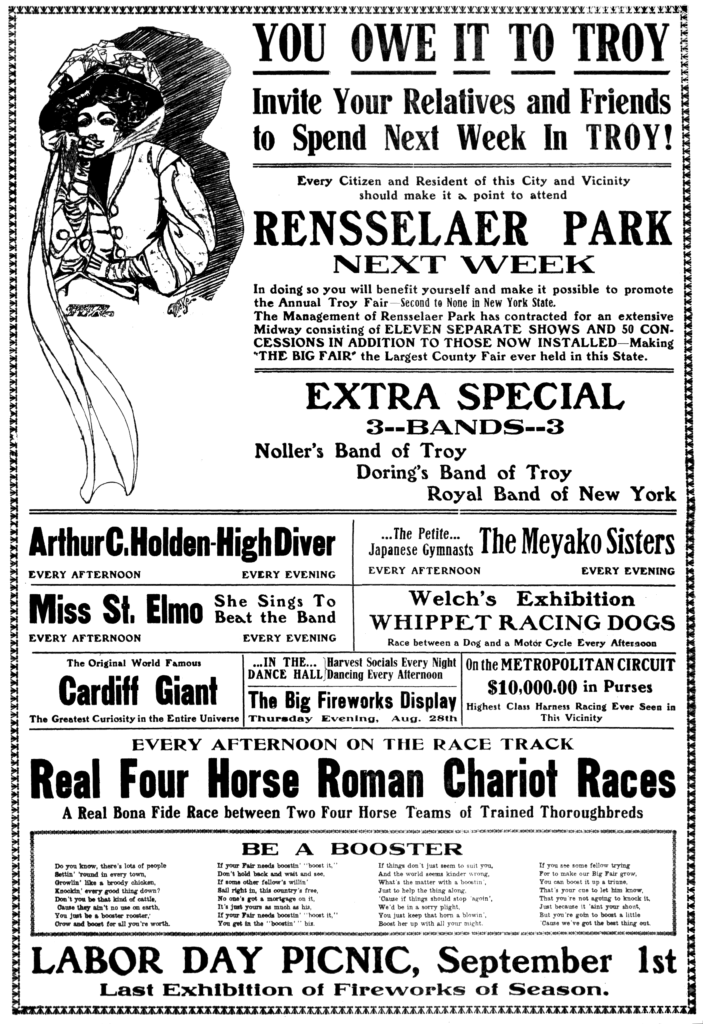 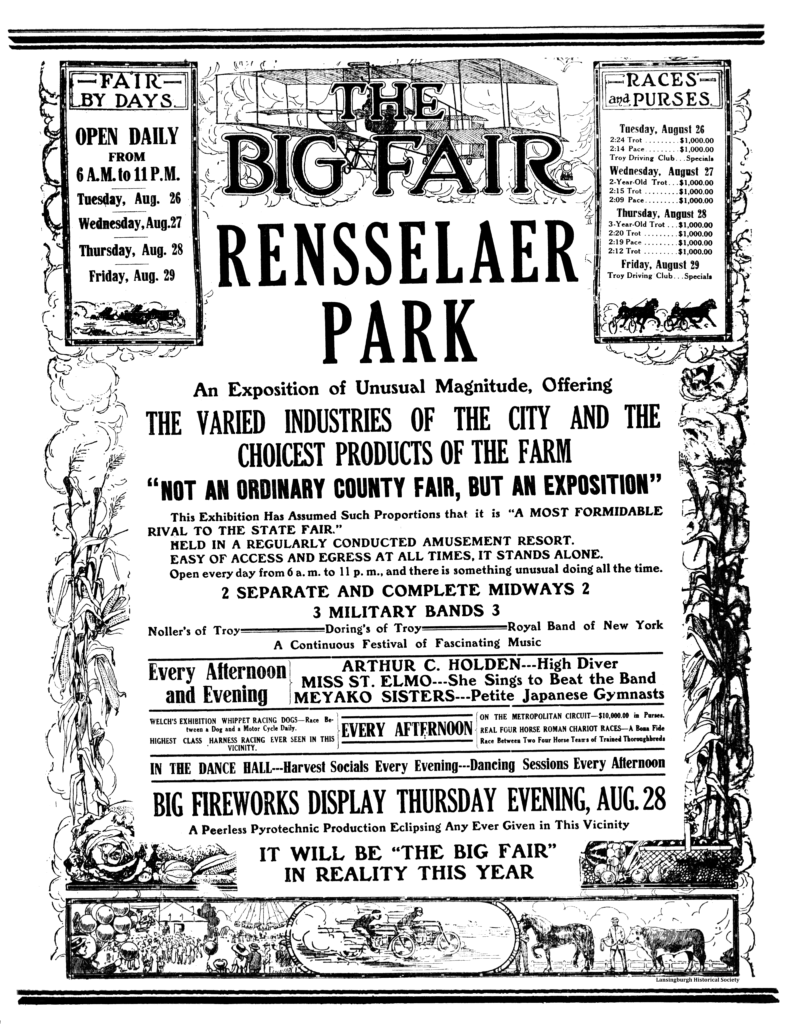 Matrimonial Matters. […]
Miss Gladys Belden of Troy and Lewis F. Papst of Buffalo were married yesterday afternoon in the rectory of the German Trinity Lutheran Church by the pastor, Rev. John Duerschner. Mr. and Mrs. Yosatu Kudere were the attendants, and after a short wedding trip Mr. and Mrs. Papst will take up their residence in Buffalo.
“The Northern Wards.” Troy Times. August 17, 1915: 8 col 3. 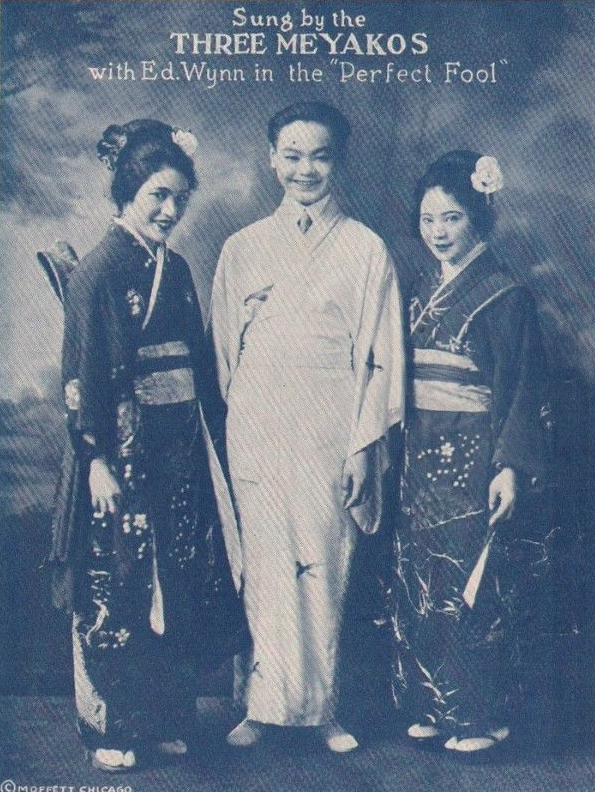 “Three Meyakos” detail from sheet music for “Stealing” by Dan Sullivan from the Broadway show The Perfect Fool.

VAUDEVILLE ARTISTS.
—
Leading Entertainers—Delight Audience at Pleasantdale.
Some of vaudeville’s leading entertainers Saturday evening held an impromptu entertainment at the stage which they recently erected at Pleasantdale for this purpose. The actors and actresses, most of whom belong to the summer artists’ colony, which has grown up at Pleasantdale, attracting many of the other campers of the vicinity, besides numerous other persons who were sailing on the river or bathing at the Pleasantdale beach. In all, a crowd of about 200 persons enjoyed the entertainment. Dancing, singing and instrumental selections were given by the [Yasaku] Kadara family, a family of Japanese, who have been camping at Pleasantdale for the last several summers. There were songs by Arthur Myers and piano and vocal solos by Green [top of digitally scanned microfilm of newspaper cropped] gave piccolo selections and Neil Gorman rendered several vocal solos. The program opened with the singing of the “Star Spangled Banner” by Mrs. Joseph Flavin. Louis Gleason, President of the Pleasantdale Community Club, under whose auspices the affair was staged, made a short address. Several short acts, consisting of harmonica selections, the “comedian dolls” and whistling solos were given by John Schumacher. Mrs. John Rommel was Chairman of the committee in charge of the refreshments.
Troy Times. July 30, 1923: 3 cols 2-3.
Pleasantdale Community Elects.
The Pleasantdale Community Association last night elected the following officers for the season: President, John C. Rommell; Secretary, Fred C. Waters; Treasurer, Chris Johansen; Chairman of the Entertainment Committee, Y. A. Kadura; Chairman of Social Committee, Mrs. Joseph Faden. Mrs. John C. Rommell, Secretary, refused reelection. Reports of the Secretary and Treasurer were accepted, showing a balance of $50.50, with all bills paid. The next meeting will be held Tuesday evening at 8 o’clock in the auditorium, when a social and entertainment will be provided. The entertainment is for members of the association and their friends.
Troy Times. July 12, 1924: 5 col 7.
PLANNING WATER CHAMPIONSHIPS AT PLEASANTDALE
—
Eighth Annual Affair Is Slated for August 22.
The eighth annual 1,000-yard swimming championship for the upper Hudson River section will be held under the direction of Marty McDonagh at Pleasantdale Sunday afternoon, August 22, with three handsome medals offered to the first, second and third natators[?] crossing the finish line.

Always Big Attraction
This classic among aquatic events in this section always attracts the crack swimmers of this section and this year will be no exception. For the past several years Harry J. McManus, captain and examiner for the American Red Cross at Schenectady, has had the winning individual and team and he promises to have another sterling outfit in the meet this year. Opposing his pets will be the selects of Troy, Albany, Schenectady and nearby cities.
Ken Gray of Schenectady won last year and established a record for the course. In other years Ben Cann of Albany won twice, and still another. Troy had a victor in Jim Merwitz of Pleasantdale. In more recent trials Schenectady has had a monopoly due to the splendid coaching work of Captain McManus of Schenectady, who is also director of swimming at Union College.

No Entry Blanks.
No entry blanks are ever printed for the event, as entries for the contest are received by the promoter, Marty McDonagh, at Pleasantdale on the day of the event. The races start at a point about 500 yards above the Jap’s camp and the finish is at the Pleasantdale landing. For information write Marty McDonagh, R. F. D. No. 6, Pleasantdale, N. Y.
Troy Times. August 5, 1926: 17 col 3.

Yosaky Kudara came to Buffalo to conduct Japanese shows at the Pan-American Exposition in 1901. He married Buffalo native Irene Pabst and they had three children—Esther, Florence, and George Kudara. […] The Kudaras’ stage name was the Three Meyakos, and in 1925, the family purchased a 92-acre farm on Taylor Road. A tenant tended the farm while the Kudaras were performing all over the United States and Canada. Later, the farm was known as Kudara’s Grove and it was used for country picnics.
Edson, John R. Hamburg: 1910-1970. Charleston, SC: Arcadia Publishing, 2003. 90-91.