What became the Deborah Powers Home for Old Ladies originally began in the late 1840s as the home of John Morey in that part of the Village of Lansingburgh called Adamsville.

Improvements.
Many improvements are being made in the north part of the village. In a short time Adamsville will shine forth in bran new city toggery, with paved alleys, flagged sidewalks, graded streets and splendid buildings. As a model for a beautiful residence, our place cannot boast of a better one than can now be found in this delightful part of the town, and which has just been erected by Mr John Morey. It really is a mystery to many, how it happens that this end of the town has improved so much, and were it not for the energy of those well known pioneers, Messrs. Adams & Peebles, it would be inexplicable. The verandah at the Tammany Hall is a love of a place, and when the line of Cabs is started which will set down passengers at its door, many of our citizens whose ignorance of the rapid growth of Lansingburgh can be attributed to their indolence, will have no longer an excuse for not visiting it. A road to intersect the Brunswick road at the top of the hill, will soon be opened, and thus will enable a new class of customer to find their way to Adamsville. We imbibed a delicious lemonade at Tammany Hall last week, such an one as only Thomas knows how to make.
Lansingburgh Democrat. June 28, 1849: 2 col 1.

Home for Aged Women.
Mrs. Deborah Powers, who purchased the Daniel E. Davenport property on State [Second Avenue] and Congress [Third Avenue] streets at Washington [123rd] street, it is understood, contemplates converting the premises into a Home for Aged Women. This action will receive the hearty commendation of every citizen. The location is one of the finest in this locality for an institution of that nature. The surroundings are pleasant and healthful, and it is easy of access from all quarters, the street railroad running right past its door.
Lansingburgh Courier. April 28, 1883: 2 col 4.

—The Messrs Powers have commenced the work of transforming the Daniel E. Davenport homestead into an old ladies home.
“Building and Improvements.” Lansingburgh Courier. June 23, 1883: 2 col 3.

—Bergmann Brothers are remodeling the brick barn attached to the old ladies’ home. The barn was built a number of years ago by Daniel E. Davenport at great expense. Mr. Davenport was a railroad contractor in South America. The barn will be converted into tenements.
“Lansingburgh.” Troy Daily Times. July 14, 1891: 3 col 4. 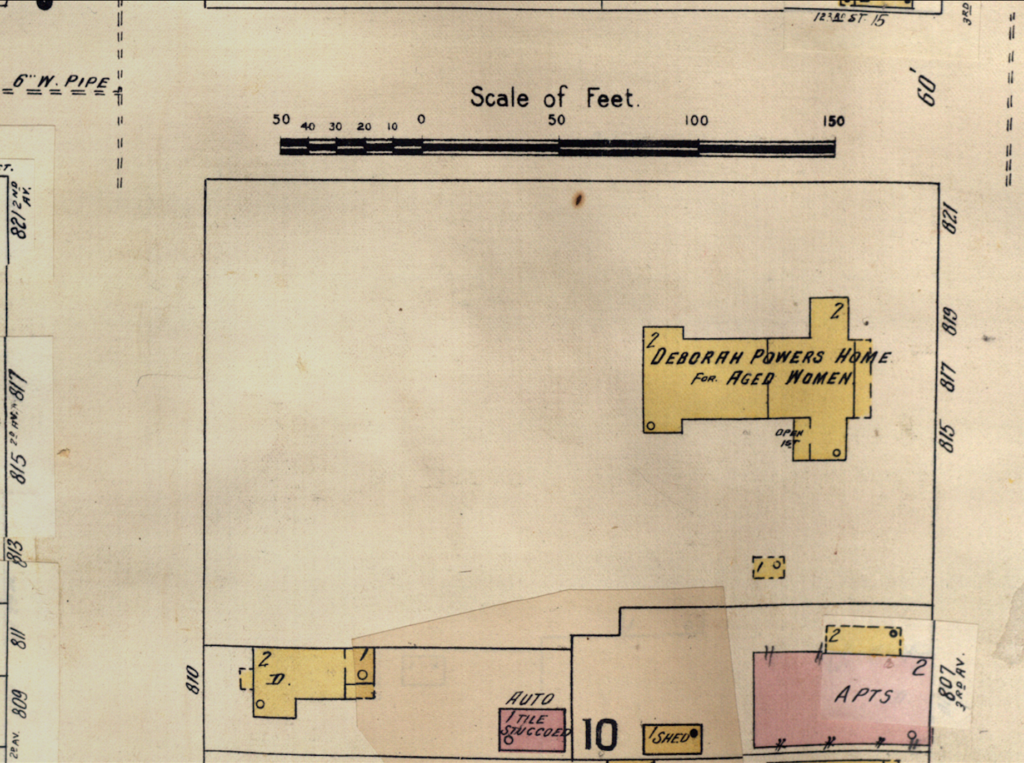 FENCE FOR SALE—The Deborah Powers Home will sell to the highest bidder on Oct. 1, prox, the entire picket fence on its premises (500 feet or more). Said fence shall be removed at early convenience of buyer, who shall fill all postholes with earth. Send bids in writing to H. L. LAMB at Bank of D. Powers & Sons, Troy.
Troy Times. September 26, 1908: 6 col 4.

OLD LADIES REGISTERED.
—
Residents of the Powers Home Marched to the Registration Place in a Body—Anxious for Election Day to Come.
A unique feature of the registration of women for the first time this year occurred in one of the districts of the Seventeenth Ward when all the ladies from the Powers Home marched in a body to The Twining Steamer Company house and registered. With one or two exceptions these elderly women expressed sympathy with the Republican party, and they seemed very anxious for Election Day to come that they may cast their first vote.
Troy Times. October 14, 1918: 3 col 3.
STOLEN
HALLOWEEN NIGHT
Iron gate from Deborah Powers Home for old ladies. Reward if returned.
“Lost.” Troy Times. November 7, 1918: 11 col 1.