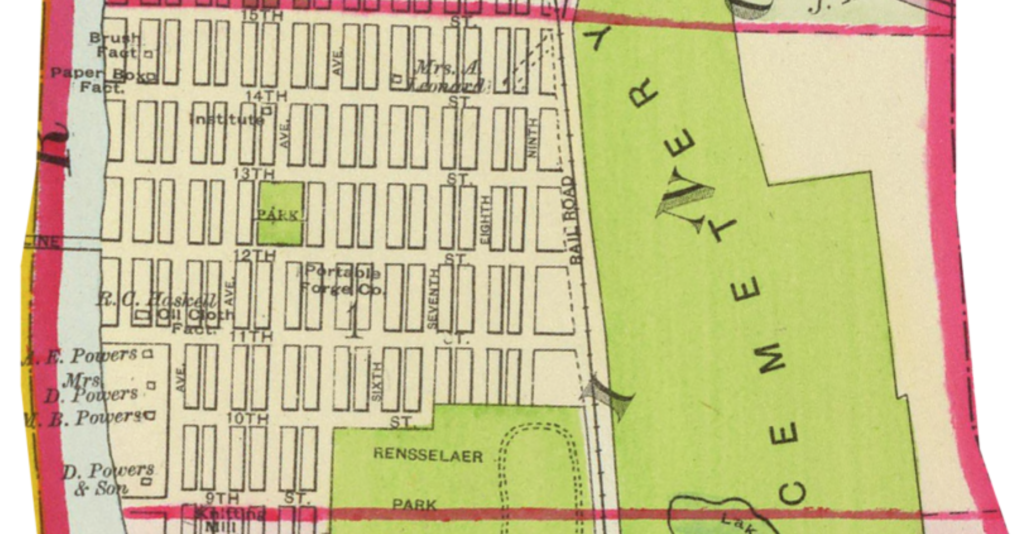 Detail of Ward 1 of Village of Lansingburgh cropped and edited from Beers, F. W. “Portion of Rensselaer County and Cities of Lansingburgh & Troy.” Atlas of the Hudson River Valley from New York City to Troy. NY: Watson & Co., 1891.

The 1891 map shows the home of “Mrs. A. Leonard” at the northeast corner of Sixth Avenue and One Hundred Fourteenth Street. 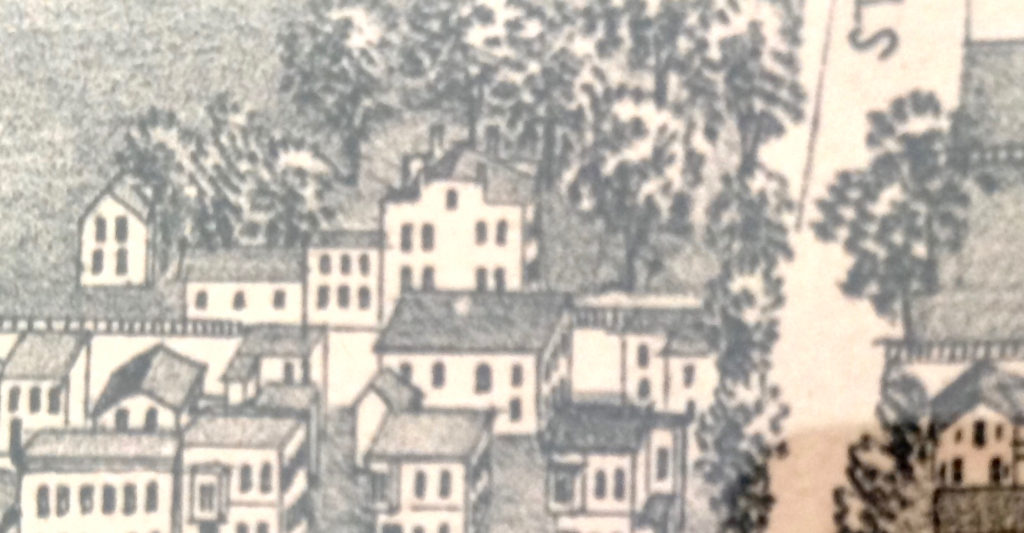 The Leonard hospital trustees will meet at the residence of A. E. Powers to-night.
“Local News and Seasonable Jottings.” Lansingburgh Courier. April 13, 1893: 3 col 1.

—The directors of Leonard hospital will meet to-night at the People’s bank to discuss the question of opening the institution.
“Local News and Seasonable Jottings.” Lansingburgh Courier. April 5, 1894: 3 col 2.

Notes.
—Tends have been erected on the Leonard Hospital grounds to provide for any emergency that might arise from the great crowd at the [71st Annual Rensselaaer County Agricultural and Horticultural Society] fair [at New Rensselaer Park in Lansingburgh].
Troy Times. August 20, 1908: 5 col 6. Semi-Weekly Edition.
Hospital Superintendent Resigns.
Miss Anna M. Beadle, for four years the efficient Superintendent of the Leonard Hospital, has resigned to accept the office of Superintendent of the Nurses’ Training School of the Post Graduate Hospital in New York city at a greatly increased salary. In accepting this position, which she will assume March 1, Miss Beadle returns to the hospital in which she received her own training. She spent several years in private practice before accepting the position in the Leonard Hospital. Since her connection with the institution the hospital work has increased greatly, so that now it has become necessary to arrange for a $10,000 addition. The hospital now has twenty-four beds and twenty-three patients, although at times it has accommodated twenty-eight patients. This number was under the roof in October, 1906, when the railroad accident at the Lansingburgh crossing of the Boston and Maine Railroad occurred, and the same number was accommodated last summer, when the Superintendent gave up her sleeping quarters to accommodate the sick. During the last few weeks it has been necessary to turn away patients. During the summer patients were accommodated in tents in the yard. Miss Beadle will leave Troy the latter part of this month and report for her new duties on February 28. Miss Beadle’s home is in Cooperstown.
Troy Times. February 3, 1911: 6 col 2. Semi-Weekly Edition.
HOME MATTERS.
—
LANSINGBURGH.
—
Hospital to Have an Addition […]
Although nothing definite has as yet been done by the Directors of the Leonard Hospital, it is understood that the FInance Committee shortly will consider plans for an addition. It is understood that practically every member of the board is in favor of the building of an addition, and that in fact negotiations have already been carried on with a local architect on the subject. The addition has been necessary for some time now, and the hospital workers have long agitated a change which will give more room for hospital use. An improvement which will be made possible with the additional space will be the equipment of a children’s ward. It is thought that the plans will be consummated and work on the addition will be started as early in the spring as feasible. The money used in the improvements will be drawn from the estate of the late Edward Leonard, the original endower of the hospital. The Leonard Hospital Needlework Guild, which for a number of years has been furnishing the linen, furniture and minor equipment of the new institution, is taking an active interest in the proposed improvement, and its annual sale at the Riverside Club this fall will be conducted with a view to raising enough money to furnish the proposed new children’s ward.
Troy Times. October 19, 1912: 6 col 1. (Last edition.)
BUILDING OPERATIONS.
—
Addition to Hospital Building […]
Among the new building work to be commenced soon will be an addition to the Leonard Hospital in Lansingburgh, the plans for which have been completed by architect William E. Clark. The addition will be of brick and will cost about $13,000. The bids will be received up to to April 28.
Troy Times. April 17, 1913: 5 col 2. 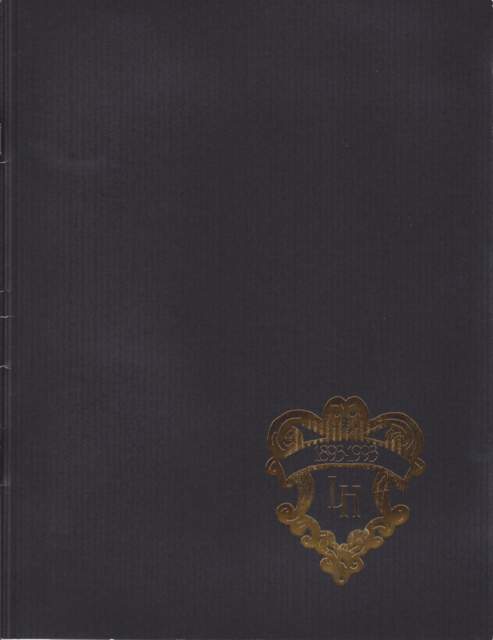 Seton Health System to end services at Leonard Hospital
By JILL BRYCE
Gazette Reporter
TROY — Seton Health Systems, which manages St. Mary’s and Leonard hospitals, will close most of the remaining health services at Leonard Hospital as of Dec. 1.
It is seen as a cost cutting measure and part of a larger reorganization by Seton Health Systems.
Seton may sell or change the Leonard building, located in North Troy at 74 New Turnpike Road, into offices, Seton president Dr. Edward Murphy said in published reports Thursday.
He could not be reached Thursday for further comment. The nursing supervisor on duty at Leonard Hospital also would not comment.
Murphy said the outpatient department, medical imaging unit and the urgent care practice at Leonard would shut down Dec. 1.
As a result, all that will remain are the addiction and alcohol treatment related beds and some other office space.
In June, Leonard Hospital officers announced they would close the emergency room to convert it into an urgent care center.
Seton Health System manages both Leonard Hospital and St. Mary’s Hospital. It consolidated its emergency medical services in the emergency room at St. Mary’s.
Murphy has said that Seton will lease a 30,000 square foot former Grand Union building on Hoosick Street as an outpatient clinic. The building is close to St. Mary’s Hospital, which is located a short distance away at 1300 Massachusetts Ave.
Many recent changes at Seton Health Systems have been part of an effort to reduce costs. It’s expected that Seton will report 1995 revenues of $80 million.
Murphy has said that 20 Leonard employees will be relocated to St. Mary’s because of the reorganization, but no one is expected to lose their job. Leonard Hospital employs 100 people.
Seton Health Systems was formed when St. Mary’s and Leonard merged a year ago.
Daily Gazette. November 24, 1995: B7 cols 2-3.
https://news.google.com/newspapers?id=Yj5GAAAAIBAJ&sjid=ROkMAAAAIBAJ&pg=5270%2C5740690