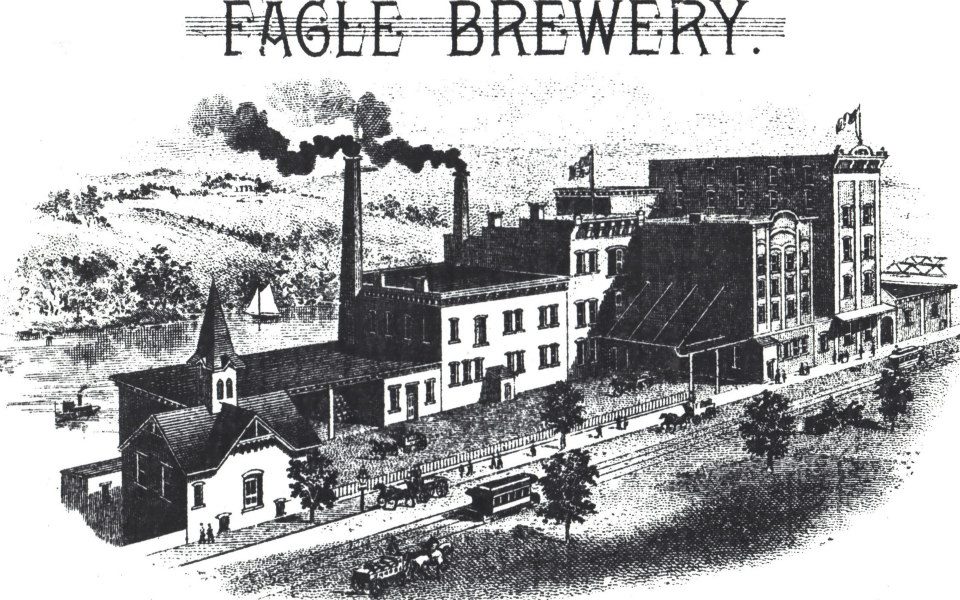 —A good summer drink, and a drink for health, are the sterling brands brewed by S. Bolton & Sons. The “Home Brewed” and “Bitter Pale” ales are reliable.
Lansingburgh Courier. June 30, 1876: 3 col 1.

—S. Bolton & Sons have shipped a brewing of their “Celebrated Home Brewed Ale” to the Centennial grounds. Lovers of good ale can find it on draught there. Make a note of it.
Lansingburgh Courier. May 12, 1876: 3 col 3.

ALWAYS appreciating the public wants Messrs. Bolton & Sons, the proprietors of the Eagle Brewery, and manufacturers of the celebrated Home Brewed and Bitter Pale Ales, are now engaged in bottling an ale intended expressly for the use of families and invalids that is fully equal, and in many respects superior, to any of the English and Scotch imported ales, which they are furnishing at the low price of 75 cts per dozen.
Lansingburgh Gazette. December 8, 1877: 3 col 4.

One of the largest manufacturing industries in Lansingburgh is that of S. Bolton’s Sons, located on the west side of Second avenue in the Fourth ward. It is known as the Eagle brewery and is one of the most important ale and porter breweries of Northern New York. The firm now consists of Samuel Bolton, jr., and Joseph Bolton, brothers. Samuel Bolton, jr., is the business head while his brother attends to the practical end of the business. The establishment has gained a high reputation and its output is enormous. Employment is given to a large number of hands. Samuel Bolton, jr., is one of the prominent citizens of the village. He is interested in the banking business and his real estate holdings are large, the firm being among the largest taxpayers of the village. The business was established in 1865 by the father of the present members of the firm, who came from England. From a small beginning it has grown to its present proportions and produces for its owners large fortunes.
Anderson, George B. Landmarks of Rensselaer County, New York. Syracuse, NY: D. Mason & Co, 1897. 399.

Six barge loads of rags, picked up on the battlefields of Belgium, arrived in Troy by way of the barge canal and are stored in the building formerly used as an ale brewery by S. Bolton’s Sons. While boatloads of rags are not unusual sights in Troy, this shipment has created much interest, for portions of the uniforms of Belgium soldiers may be seen sticking from the bales. The rags were brought to Troy, as the persons to whom they were consigned were unable to obtain storage in New York.
“New York Briefs.” Philmont Sentinel. September 20, 1920: 10 col 6.

TROY, Nov. 15.—If beer comes back, at least four Troy brewery survivors of the before Volstead era are reported ready to manufacture real ale and lager with the crack of the law-lifting gun.
Owners of these four of Troy’s once famous string of breweries are ready to greet the return of beer. Two of them have already started. But their dollars will really start to flow the minute Congress has changed the law, making real beer legal.


Adding to Force.
Plants like Fitzgerald Brothers at 498 River street and Stoll’s at the foot of Spring avenue could begin hauling away kegs within two weeks, it is reported. The former plant, of which William B. Fitzgerald is president and treasurer, was transformed into a malt house some years ago and as such could now switch to the business of beer on short order.
At the present time twelve men are employed at the Fitzgerald Brothers’ plant, and two more are being added t the force today. About 300 men would go to work tomorrow if beer became legal, according to Mr. Fitzgerald.
In the pre-Volstead era five of Troy’s breweries, John Stanton’s, Quandts’, Fitzgerald Brothers’, Stolls’ and S. Bolton and Sons’, had an annual payroll of $600,000. The same kind of payroll might roll up if beer is legalized, and hundreds of thousands of additional dollars would be spent on new machinery and equipment, it was said last night.

Others Prepared.
Fitzgeralds’ and Stolls’ stand ready. Stolls’ recently was completely reconditioned. Reports given wide circulation also say that the John Stanton Brewing Company plant at 1431 Fifth avenue and the Bolton plant at 331 Second avenue, Lansingburgh, would likewise soon be ready to manufacture.
From reliable sources it was learned last night that trucking companies using the idle Stanton plant for storage purposes had been instructed to vacate the premises December 1. This report could be neither affirmed nor denial, since Grace M. Stanton, president and treasurer of the company, could not be reached in New York city, and George H. McCarthy, secretary, could not be located.
Joseph Bolton, secretary of S. Bolton and Sons, realtors, an out-growth of S. Bolton and Sons, brewers, and once nationally known for their Boltons’ ale, doesn’t know “what we will do until beer has actually been made legal.” However, the plant is there and in good condition.
Saratogian. November 15, 1932: 9 cols 5-6.
Two Alarm Fire Today Wrecked Old Bolton Brewery Property
BUILDING USED AS STOREHOUSE FOR TOOTHBRUSH FIRM
—
Residents in Vicinity Declare Terrific Explosion Was Followed by Structure Being Enveloped.
Fire wrecked the three story brick building of the old Bolton & Sons brewery at Second Avenue and 107th Street shortly before noon today. In rec3nt years the building has been used for the storage of celluloid chips or refuse by the Hughes-Autograf Brush Co.
There was no one n the building at the time the fire started but residents along Second Avenue said that there was a terrific explosion about 11:05 a.m. and that within seconds after that the whole building was in flames. All Lansingburgh’s fire equipment and Central fire headquarters were called by two alarms.
No estimate of the damage to the building, which has been a land mark in Lansingburgh for many years, could be given by William Bolton, the present owner. In former years the Bolton brewery was assessed for $70,000 but it was dismantled during prohibition days and has been used for storage purposes since.
“There is not a penny of insurance on the property,” Mr. Bolton said.
Decline to Estimate Loss.
The Hughes-Autograf Co. declined to make any estimate of loss. The material stored in the building was said not to be insured.
The main four-story brick structure of the brewery, formerly used for beer storage, was damaged by smoke but by keeping streams of water playing over it, firemen were able to save it for a time.
The blaze broke out again in the main building about 2 p.m. and firemen began to try to knock over the rear wall into the river to get at the interior of the structure.
This later fire was brought under control within an hour without much damage to the main structure.
Mayor Frank J. Hogan, Dr. Walter D. McKenna, commissioner of public safety; Chief of Police John B. Conroy, Thomas F. FitzGerald, commissioner of public works, and William F. Luby, head of the Bureau of Water Supply, spent several hours at the fire.
Capt. Frank J. Connery of the Traffic Bureau assisted Captain Smith and a detail of ten policemen in rerouting traffic and keeping the crowds back of the fire line.
The Salvation Army served hot coffee to the firemen.
To the north, a one-story brick structure, now used by Q. H. Ball for storage of automobiles, was saved. All cars were removed from the building shortly after the fire was discovered.
Sparks ignited the roof of the Bolton homestead directly across Second Avenue from the brewery. Ladders were raised and the fire extinguished with chemicals. Mrs. Bolton is ill in the house.

Blast Heard for Blocks.
Police of the Fourth Precinct, directed by Capt. Joseph L. Smith, kept back with difficulty hundreds of spectators. The explosion was heard for blocks and, even before the second alarm was turned in, Second Avenue was packed with onlookers.
The fire was spectacular. The building which was destroyed was the one in which beer was made. A huge steel cat, the only remaining piece of equipment, threw off a tremendous amount of heat. A wall at the extreme south of the structure threatened to collapse at any moment. The smoke from the burning celluloid chips was black and thick. The heat was so intense that paint on wooden dwellings on the east side of Second Avenue were blistered. Telephone lines within two blocks of the fire were put out of commission.
The building which burned was built in 1875 by Samuel Bolton, grandfather of the present owner. In 1892 the main building was erected. The homestead was built at the same time as the old building.

Used for Storage.
Mr. Bolton said:
“The room where the fire started has been used for storage by the Hughes-Autograf Co.—waste material from the handles of brushes. Many and many times I have had to drive boys out of the building for fear of just such a thing as has happened. The brewery was last used as such in 1919 and has been dismantled. I can’t make any estimate of damage, although the brewery buildings once were very valuable.”
The last serious fire in that vicinity was in 1924 when Bolton Hall was destroyed.
The first fire alarm was sounded at 11:07 a.m. from Box 566, at 111th Street and Fifth Avenue. The second alarm was from Box 556.
Times Record. April 9, 1940: 1 col 1, 9 col 3.