From our second edition of yesterday.
ANOTHER FIRE IN LANSINGBURGH.
This unfortunate village was visited by another destructive fire on Sunday evening, about 10 o’clock. […]
Among the buildings destroyed are the following: […]
Mr. Jacocks, Harness shop—Bowling Alley in the basement. […]
FURTHER PARTICULARS. The fire was discovered at 10 1’2 o’clock in Mr. N. Jacock’s barn, and burnt 3 hours. The following building were destroyed or injured:

ON STATE ST.
Ball alley and shed—the latter was filled with casks containing liquor—all destroyed.
N. Jacock’s 3 story building—occupied as a dwelling and saddler’s shop—and the basement as an oyster cellar. Insurance on building $1000—on stock and furniture $500.
Troy Daily Whig. July 25, 1843:2 col 3.
GRAND CONCERT.
MR. SHAW
Respectfully announces to the inhabitants of Lansingburgh and vicinity, that in compliance with the wishes of many of his friends, he will give a concert of Vocal Music, at the Phoenix Hotel, on Thursday evening next, 8th instant, on which occasion he will be assisted by the “Cone Family,” and other distinguished Vocalists of Albany.
The Programme will be selected from the best Modern authors, and by request will include several sacred songs and duets.
Admittance 25 cents—tickets to be had at the Phoenix Hotel, and of S. D. Smith, or at the door.
Doors open at 7 o’clock, and concert commence at 1-2 past 7 o’clock.
Lansingburgh Democrat. February 7, 1844: 2 col 5.

There is to be a Concert at the Temperance Hall on Monday evening.
Lansingburgh Democrat. February 1, 1845: 2 col 1. 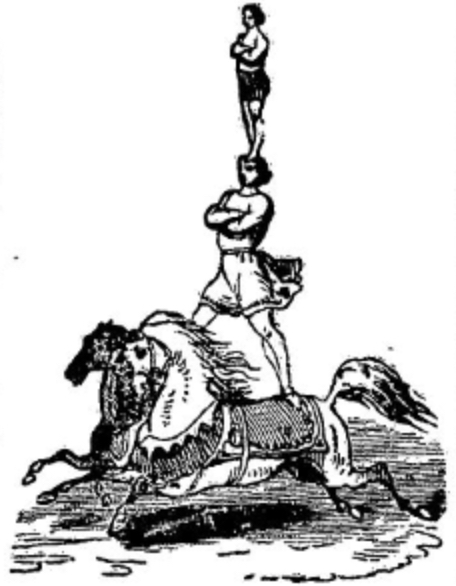 WILL EXHIBIT THEIR UNRIVALLED performances in Lansingburgh on Saturday afternoon and evening June 14th 1845.
Doors open in the afternoon at 2 o’clock, performances will commence at 2 1-2 o’clock: in the Evening the Doors will open at 7 1-2 o’clock performance to commence at 8 o’clock.
Not less than 100 Men and horses, consisting of the greatest equestrian and gymnastic talent ever combined in the United States.
Gentlemen will be in attendance to show the ladies and gentlemen to their seats.
For full particulars, see bills at the principal hotels,
je3 6t G. DAVENPORT, Agent.
Lansingburgh Democrat. June 14, 1845: 2
MUSEUM.

Grand Moral Exhibition?
A MAGNIFICENT COLLECTION of
WAX FIGURES
AS LARGE AS LIFE, FULL DRESSED.
A grand Cosmorama, and other great curiosities will be exhibited at No. 7 Willet’s Row, Lansingburgh, Commencing, Monday 16th March 1846, for 12 days from 6 1/2 o’clock to 9 o’clock in the evening. Admission to suit the time, only 12 1-2 cents. Children under ten years of age half-price.
This splendid collection has been visited by over 50,000 persons in the city of New York, many have visited it, and have been highly pleased. It is an exhibition calculated to please the ladies as well as gentlemen; the figures are as large as life and full dressed; the Cosmorama has views of various kinds, and looked at through magnifying glasses, such as they have in Museums, the whole forming a classic, moral, and pleasing exhibition.

BY PARTICULAR REQUEST.
THE Manager has consented to devote Monday and Tuesday Evenings, 23 and 24th, to Ladies, and Gentlemen accompanying Ladies. On these evenings, boys will not be admitted, except accompanied by their parents.
Lansingburgh Democrat. March 21, 1846: 2

ICE CREAM.—Houghton’s Ice Cream Saloon is in full blast for the season. Just give him a call, and if after partaking of his delicious drinks, you do not imagine yourself transported to fairy land, and all the little angels pouring ‘lasses on you, then we are no judge.—We’ve been there, and know.
Lansingburgh Democrat. June 6, 1846: 2 col 1.

Great Musical Attraction
IN LANSINGBURGH!—FOR ONE NIGHT ONLY!—Miss CAROLINE HIFFERT, from the New York and New Orleans Concerts, respectfully informs the citizens of Lansingburgh and vicinity, that she will give a

Grand Concert at Lansing Hall,
on WEDNESDAY EVENING, July 8th; on which occasion she will be assisted by Mr. L. LEE, the popular Ballad Singer, and Mr. CARL HIFFERT, the celebrated Pianist
Tickets, 25 cents. Doors open at 7—Concert to begin at 8. Full particulars in the Programmes.
jy7 2t
Troy Daily Whig. July 8, 1846: 3 col 2.
FOR ONE NIGHT ONLY.
THE CELEBRATED BAND OF
SWISS BELL RINGERS,
WILL GIVE ONE GRAND
CONCERT,
At LANSINGS HALL, Lansingburgh,
on SATURDAY, January 2nd.
Tickets 25 cents—no half price. Doors open at 7 o’clock – performance commence at half-past 7.
Lansingburgh Democrat. December 31, 1846: 2

CHRISTY’s Band of Ethiopian Seranaders are to give a Concert at Lansing’s Hall this evening. Such an opportunity for enjoying rich Singing, is not often afforded our citizens. To secure good seats, those who wish had better go early.
Lansingburgh Democrat. January 21, 1847: 2 col 2.

The Alleghanians sung admirably last night. Their pieces were received with enthusiastic applause. They give another Concert here on Monday evening. See their advertisement.
P. S. The Alleghanians will give a Concert at Lansing’s Hall, in Lansingburgh, this evening.
Northern Budget. May 29, 1847: 2 col 3.

The dancing season made its debut in this village at the Phoenix Assembly Room, on Wednesday evening last. Hurry up them pumps!
Lansingburgh Democrat. November 27, 1847: 2 col 2.

Young Men’s Association.
The Rev. Ebenezer Halley, of Salem, Washington co., will lecture before the Young Men’s Association this evening, at the second Presbyterian Church.
Lansingburgh Democrat.January 6, 1848: 2 col 2.
Birth-Day Supper.
On Saturday evening we formed one of a number of invited guests, who partook of a choice supper given by our fellow citizen, B. G. Hathaway, in commemoration of his fiftieth birth-day. During the evening the Lansingburgh Brass Band enlivened the entertainment with several of their choice pieces; they also gave a small specimen of their skill, upon the balcony in front of his residence to a large crowd of citizens who assembled to listen to their performance. Every thing passed off agreeably, and we cannot refrain from wishing, in this connection, Mr. Hathaway and his amiable spouse, many more years of connubial happiness and felicity.
Lansingburgh Democrat. February 17, 1848: 2 col 1.
Concert.
The Concert given by Master James Field, at the Phoenix Hotel, was well attended, and the audience appeared highly pleased with the performance. We understand that he will give an entertainment in Waterford in a few days, and hope that he will be greeted with a full house.
Lansingburgh Democrat. January 4, 1849: 2 col 1.

THE OLYMPIC.—Mr. Rossiter holds forth at the Olympic this evening in feats of Legerdemain, Slight of hand, &c.
Lansingburgh Democrat. January 11, 1849: 2

The Sleighing.
We are still in the enjoyment of as good sleighing as any of our northern neighbors can boast of. The prospect for its continuation through this month is at present as fair as may be, and the idea of a January thaw had consequently better be postponed for a few weeks at least. […]
The lovely moonlight evenings which we have lately had, has considerably augmented the number of pleasure taking belles and beaux, as might have been seen on any night by the number of well filled sleighs, of all sizes and names, from the one horse jumper up tot the eight-stringed “Springfield,” with their incessant musical jingle of bells, that have without intermission passed and repassed through our streets,a nd have by the addition of a vocal accompaniment which though perhaps not at all times in exact accordance with the rules of harmony, yet has cheered and added much to the enlivenment of the place.
Lansingburgh Democrat. January 11, 1849: 2

SET ‘EM UP.—BOWLING SALOON.—The Bowling Alley on Richard street, in Lansingburgh, has just been refitted up in a splendid style and is now open with two of the best alleys that can be found in the county. The proprietors promise that the public will find every comfort and convenience at this place. Charges reasonable. Please call.
KINSLEY & KING.
Lansingburgh, February 3, 1848.
Lansingburgh Democrat. February 3, 1848: 3 col 1.