MARTIAL LAW IN LANSINGBURGH.
To our great surprise it has become necessary to declare Martial Law in that dreamy place, that place of repose, Lansingburgh. We are as yet ignorant of any overt act committed by the Burghers of the ancient commonwealth, to render such vigorous measures necessary. Below we give the order, in a letter from our correspondent:
To the Editors of the N.Y. Express:
LANSINGBURGH, July 22, 1863.
I mail you to-day our “General Order 38,” being a burlesque on an ordinance passed by our Village Trustees, (a Republican body,) who attempted to close Hotels, &c., at 11 o’clock P.M.
Last evening we posted these large bills all over town, and this morning the Democracy is on a broad grin, while the Republicans look glum enough.
Since the Troy riot our authorities have established a night watch. Every watchman belongs to the Loyal League, (and there are 25 on watch) each receiving $2 per night.
The “S. B. Society,” referred to in clause 13, is a Republican Society, sworn to protect each other.

“Brutum Fulmen.”
GENERAL ORDER 38.
Whereas, the Honorable Mayor and Common Council of this ancient and peaceful Burgh, did see fit to decree, that all Hotels and Restaurants should be closed at eleven o’clock P.M., and whereas, the proprietors of said houses “didn’t see it,” and did not close their houses, now, therefore,

I, THE CHIEF MOGUL,
AND
GRAND HIGH-COCK-A-LO-REM
DO DECLARE
MARTIAL LAW!
to exist within the borders of this “Finished Place,” and do enact as follows:
1st. All small boys shall be housed at dark, and larger boys soon after.
2d. No citizen will be allowed to carry more than two arms.
3d. Horse cars running after dark shall have their wheels muffled, and not disturb the slumbers of our ever vigilant night watch.
4th. The sale of “Hoxsie” to any armed persons after dark is prohibited.
5th. Milkmen are not allowed to ring their bells and disturb the quiet of our loyal citizens.
6th. Fishmongers are hereby forbid blowing their horns, even if “they don’t sell a fish” in consequence.
7th. Any crowd of two persons or less, will be dispersed by the Military.
8th. Berry-women must get a permit before crying “raspberries,” or cry it at their peril.
9th. All crying babies will be instantly confiscated—in fact any symptom of riot will be squelched.
10th. Dinner bells shall cease to ring the knell of sustenance; and the church bells must be subdued.
11th. Cats on garden walks, and noisy dogs, are respectfully requested to preserve order.
12th. Be it understood that the Major-General commanding, is decidedly in favor of a “draught,” which he will enforce, by the Eternal!
13th. The “S. E. Society,”—in case of any alarm—is to be put into the hands of good and careful nurses, for safe keeping until the danger is over.
The Major-General commanding this division is determined that peace and quiet shall reign supreme in this ancient commonwealth, the “Garden of America.” Burghers are therefore ordered to report any breach of the above orders to the High-cock-a-lo-rum, at his headquarters.
By order of
MAJOR GENERAL B. B.
S. B. LOYALTY, ADJUTANT.
LANSINGBURGH, July 23d, A. D., 1863.
New York Evening Express. August 1, 1863: 4 col 2. [article reformatted slightly to more closely match actual broadside] 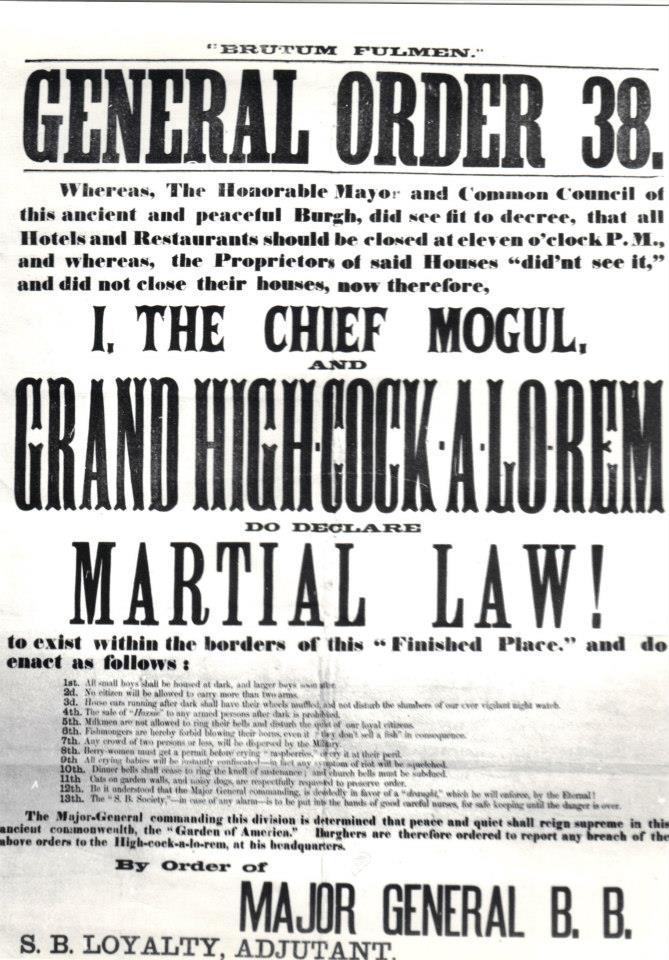