A History of the A. M. E. Zion Church, Lansingburgh, N. Y., from 1841 to 1868 https://archive.org/details/historyofamezion00wrig by Rev. Jacob P. Wright (inexplicably only partially digitally scanned) will inform the reader somewhat about that church (not the same one as the Fifth Avenue AME Zion Church), though it is in some respects thin on the information one would want to know about the church. There’s no list of all the ministers who served there, for example. Hopefully other sources can be found to supplement its contents!

The information about titles and leases in the book appear to be accurate. Some of the original documents to which the book refers will be transcribed here; this post will periodically be updated.

Frisby Way and others with him had held meetings in their houses from time to time, for some years previous to 1841. […] Frisby Way went to Mr. Brockway and rented the [former Wesleyan Methodist] church. At last they concluded to buy the church for $300 (Wright 3).

Know all men by these presents that I Chester Brockway for [the?] consideration of the Sum of Three hundred dollars to me in hand paid by Jacob Brown, John Dorsey and James Hall Trustees of the Colored Methodist Zion Church in Lansingburgh the receipt whereof is hereby acknowledged have granted [?] here assigned have assigned, transformed + quit claimed and by these presents do grant bargain sell assign transfer and quit claim unto the said Jacob Brown John Dorsey and James Hall Trustees as aforesaid all my right title interest and estate of in and to the promises mentioned in the annexed lease. To have and to hold the [?] to the said Jacob Brown, John Dorsey and James Hall Trustees as aforesaid and their successors in office for ever. In witness whereof I have hereunto set my hand and seal this fourteenth day of May 1844. Chester Brockway L S [Legal Signature]
In presence of G. S. Hunt
State of New York
Rensselaer County [?] On this 14th day of May 1844 came before me Chester Brockway to me known to be the same individual described in and who executed the above conveyance and acknowledged that he had executed the same for the uses and purposes therein contained. Therefore let the same be recorded.
Recorded May 31, 1844 S. [Stephen] S. Hunt Justice of the Peace [Date of death at linked site Findagrave should be 1848, not 1818]
at half past five o’clock
Chas. Hooper Clerk

This Indenture made the sixth day of September in the year of our Lord one Thousand Eight hundred and forty four Between Jacob Brown John Dorsey David A. Oliver and Henry J M Rogers [Rev. Wright in his book gives this name as Henry J. McRogers] Trustees of the Methodist Zion Church in Lansingburgh of the first part + James Hall of Lansingburgh aforesaid of the second part Witnesseth that the said parties of the first part for + in consideration of the sum of one dollar of lawful money of the United Stated to them in hand paid by the said party of the second part at or before the ensealing + delivery of these presents the receipt whereof is hereby confessed + acknowledged & have granted bargained sold remised released aliened enfeoffed + confirmed + by these presents do grant bargain sell remise release enfeoff + confirm unto the said party of the second part + to his heirs + assigns forever all that certain piece or parcel of land situate in the third division of the Village of Lansingburgh in the County of Rensselaer + State of New York known + distinguished on a map thereof made by Flores Bancker as Lot number forty three + on the west by Pitt Street containing in Breadth front + rear fifty feet + in length one hundred + twenty feet Excepting nevertheless + reserving the building on said premises ^ now used by the said church as a place of worship + the land occupied by said building + all that part of said lot lying between said building + Pitt Street aforesaid Subject to the payment annually of the sum of six dollars being part + parcel of an annual rent of Eleven dollars payable on said Lot to Hester Allen her heirs + assigns on the first day of September in each + every year forever Together with all and singular the hereditaments + appurtenances thereunto belonging or in any wise appertaining + the reversions + remainders rents issues + profits thereof + all the estate right title interest use trust property claim + demand whatsoever of the said parties of the first part either in law or in equity of in + to the above bargained premises with the said hereditaments + appurtenances to have + to hold the said premises with every the appurtenances to the said part of the second part his heirs + assigns to the sole + only proper use benefit + behoof of the said party of the second part his heirs + assigns forever and the said parties of the first part for themselves their heirs executors + administrators do hereby covenant grant bargain promise + agree to + with the said party of the second part his heirs + assigns that the said parties of the first part their heirs + assigns the above bargained premises + every part + parcel thereof with the appurtenances unto the said party of the second part his heirs + assigns against all persons legally claiming, or to claim the same or any par thereof in the great + peaceable possession of the said party of the second part his heirs + assigns shall + will forever warrant + defend In Witness whereof the parties of the first part have hereunto set their hands + seals the day + year first above written
Sealed + delivered in the presence Jacob Brown L.S.
of P. T. Woodbury as to Jacob Brown John Dorsey his mark x L. S.
C. C. Parmeter Witness as to John Daniel A. Oliver L. S.
Dorsey D. A. Oliver + H. J. M. Rogers H. J. M. Rogers L. S.
Rensselaer County [?]: On the sixth day of September in the year one thousand eight hundred + forty four before me came John Dorsey Daniel A. Oliver + Henry J. M. Rogers to me known to be the same persons named + described in + who executed the within conveyance + severally acknowledged the execution of the same by them
State of New York Chas. C. Parmeter Justice of the Peace
Rensselaer County [?]: On this sixth day of September A.D. 1844 personally appeared before me Jacob Brown to me personally known to be one of the individuals described in + who executed the within deed + acknowledged the same in my presence P. T. Woodbury Commr of Deeds +c
Recorded June 12, 1846 at Troy
half past four o’clock P. M.
A. H. Sheldon, clerk

Frisby Way and Philip Owens went and got the Society incorporated, May 19, 1846 […] About the year 1857, the church boarded minister Butler at James Hall’s (Wright 5). 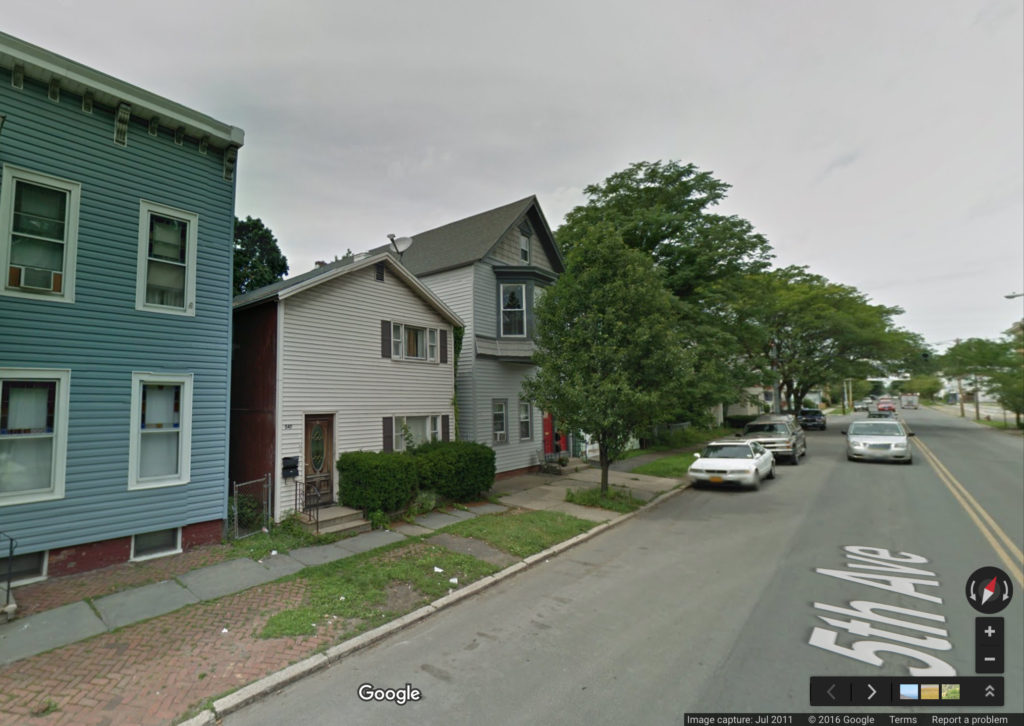 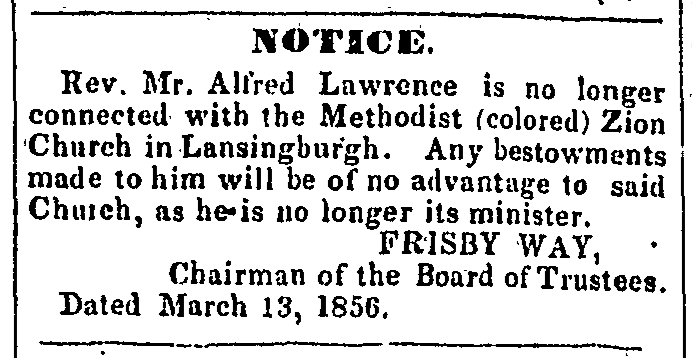 NOTICE.
Mr. Alfred Lawrence is no longer connected with the Methodist (colored) Zion Church in Lansingburgh. Any bestowments made to him will be of no advantage to said Church, as he is no longer its minister.
FRISBY WAY,
Chairman of the Board of Trustees.
Dated March 13, 1856.
Lansingburgh Democrat. April 3, 1856: 3 col 4.